Here’s some songs by the fabulous 80s group Swing out Sister – I don’t have any of their songs, I just like these enough to throw a post together, I just like her voice and style 🙂

Fooled by a Smile

Am I the Same Girl

You On My Mind

Iv’e been having some difficulties with some bullshit in my life RE. Planet Earth. I was watching that thing about WikiLeaks on TV the other night, as you know Julian Assange has now been forced out of the Ecuadorian embassy, and is likely to be extradited to the USA where he’ll more than likely spend the rest of his life in jail, which does seem a shame, it was a great idea to expose corruption lies and murder , I think most people supported it really,  it just goes to show how leaders are often turned on later.

Anyhow, what with all this global warming they’re talking about, in few hundred years it won’t matter because Earth will just be some smouldering rocks with no one left on it to tell the tale of Saint Julian and his arch nemesis Devil Trump.

Remember back in the 90’s or whenever it was U2 started doing all that stuff about God? Pretty irrelevant.

I was thinking about Annie Lennox the other day, and Tilda Swinton, they’re both Scottish, and both women! Observant ain’t I?

I woke up with one of their songs in my head like it was the first time I heard it, but I forgot which one it was, I might have invented a new one, cos I cant figure it out!

Here’s a song by the Adverts, I love the way TV Smith performs (and writes) these brilliant songs! Its like a forewarning for Brexit !

Here’s one I just found in my noodle, no other reason to play it! 🙂

I has been on a weekend trip to London, so I shall write that up here for your reading pleasure.

We set off on Saturday, I’d been busy last weekend with my family get together celebrating my parents 60th anniversary, it went well, a tea party, with cakes and sandwiches and so on, slide show and chit chat – family members came from far and wide and it all went off very well, except perhaps I ate too much cake – we all made cakes and ate each others, then at the end cos there were so many left over I took a load home and ate them over the next week. Cake isn’t really ideal as a substitute for ordinary food, I think its probably true to say it leads to headaches, nausea heart tremors and schizophrenia and ultimately death, so I was glad really when I got past the last of it by the Friday.

Saturday off to London, no purpose to this trip, just something to get us out the house, so we got on this train and went to the Tavistock Hotel in London, I’d recommend it if you’re a bit short of cash, or just like a bargain – I can’t find a photo of the breakfast room, but thats my favourite bit – you go down there and this guy seats you, he looks like he’s from Burma or something to me, he’s quite tall tho, but anyhow, this guy, he’s always there, he must be about 60, he just waves you forward when he’s ready, and points at a table at which you obviously sit, then someone comes round with tea and coffee, they look like they’re from Burma too, all the waiting staff seem to be from the same genetic group, perhaps they’re all related? Perhaps they have been serving there since the age of Art Deco, (upon which the hotel is themed) and perhaps there were originally just a few, and they’ve multiplied? No, actually, I don’t think that, I’m just being ridiculous, but its possible, but very unlikely.

Anyhow, you go and get your food from a buffet, you can have a full English, no problem, the black pudding is good! Even – I should say, cos its not easy to find good black pudding these days – https://blackpudding.club/black-pudding-a-bloody-debate/  Its to do with dried blood being used, I prefer to have the animal sacrificed in front of me at breakfast, call me old fashioned if you will.

So anyhow, we have been to this hotel 3 times now, its so much better than going to one of these modern rabbit hutch places, its a proper hotel, not a goddamn storage unit! (adult content there NSFW language!)

Where was I? Oh yeah, so thats where we stayed, then we went off to see some art at this Unit One place, I never been there before, I found it on Instagram! Quite good, very enjoyable, thing was, just before that, I saw some art on a wall in this other place, so I assumed it was a gallery, so I walked in and the guy on reception goes “Can I help?” And I was like yeah, like, keep it down mate, I’ll ask you if I want anything – and he’s like “GTFO man! This is a private building! So I’m like, Alright alright – ever heard of art being for the people by the people and of the people? Jeezers, you cant just go around looking at stuff you like anymore!

So anyhow, we saw this Johan Van Mullem stuff there, pretty exciting, and they had a glass floor you didn’t want to stand on in case you fell through, you know that sort of thing – being someone travelling to London from up in Yorkshire, you feel kind of like peasant in the big city vibe, its full of young people, the average Londoner seems to be about 23, more so now than ever, people want to live there cos its fun, not cos its sensible, its noisy, there’s no peace – whats the latest thing man? I got to get me some!

So having done that, we went off for a walk round the hot spots of Piccadilly Circus and Leicester Square looking for food, ended up in this pub called the Duke of Argyle, they had some really good pies, and Louise had Fish & chips and a pint of cider so she was a bit giddy – then thought hmm, what shall we do now? Ended up going to see The Woman in Black at this little theatre called the Fortune – it was a good show, well told, makes a change to not have to read the book or watch the film, this interpretation was pretty good, you had to imagine the scenes, as the set was sparse, but I liked that, as I’m sure everyone else did too, everyone knows what to imagine, cos its in the script.

This isn’t my photo, its off the net – but it was the same actors

I took this photo of the safety curtain during the interval – I like it! 🙂 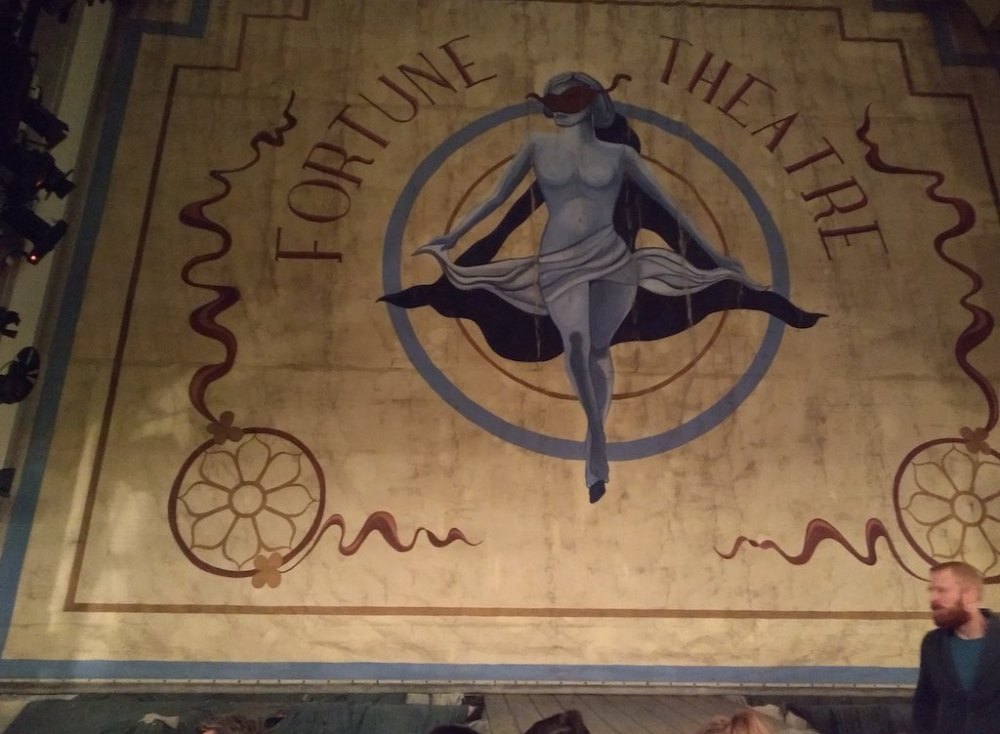 After that it was a walk back to the hotel and knock back a bottle of beer I’d got from a supermarket, you couldn’t hardly sleep for all the swearing idiots drunk outside, party music and so on, I was thinking of ringing down to reception to have them all killed, but I fell asleep in the end.

Before I set off on this trip, I was compiling a list in my mind about what to take with me – here I have expanded it applied to life in general

Next morning, well we had the breakfast I mentioned earlier, very tasty, then set off for Brick Lane in the east end, Sunday markets,

didn’t buy anything, I just like walking about looking at stuff, I took some photos of graffiti and what not, then decided to go and see the boat race, this is an annual event that draws big crowds, its between Oxford and Cambridge, this year Cambridge won, I couldn’t really care less, in fact, I just like being in big crowds of people cheering about anything really, I might even go to a football match one day, as it seems to garner a lot of interest, tho I doubt I ever will somehow, its a bit expensive, and you’d be stuck there the whole 90 mins, the boat race went by in a matter of seconds, so that was cool.

There’s all the people on the bridge at Hammersmith waiting for the boat race to go by:

You can see the weather was a bit dull 🙂 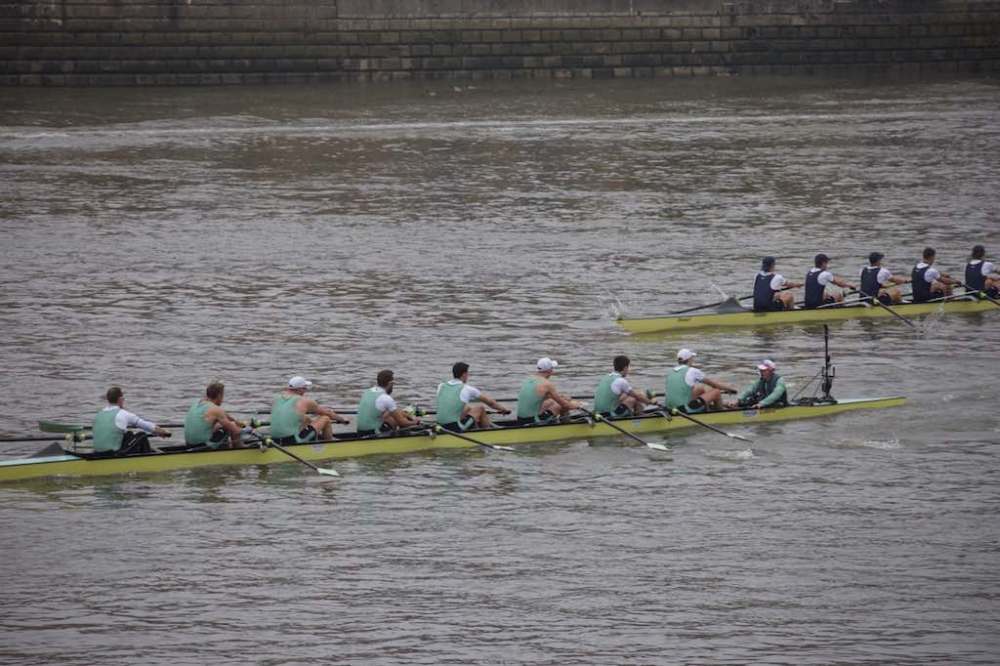 While I waited, I used my telephoto lens to snoop on people on the opposite bank! 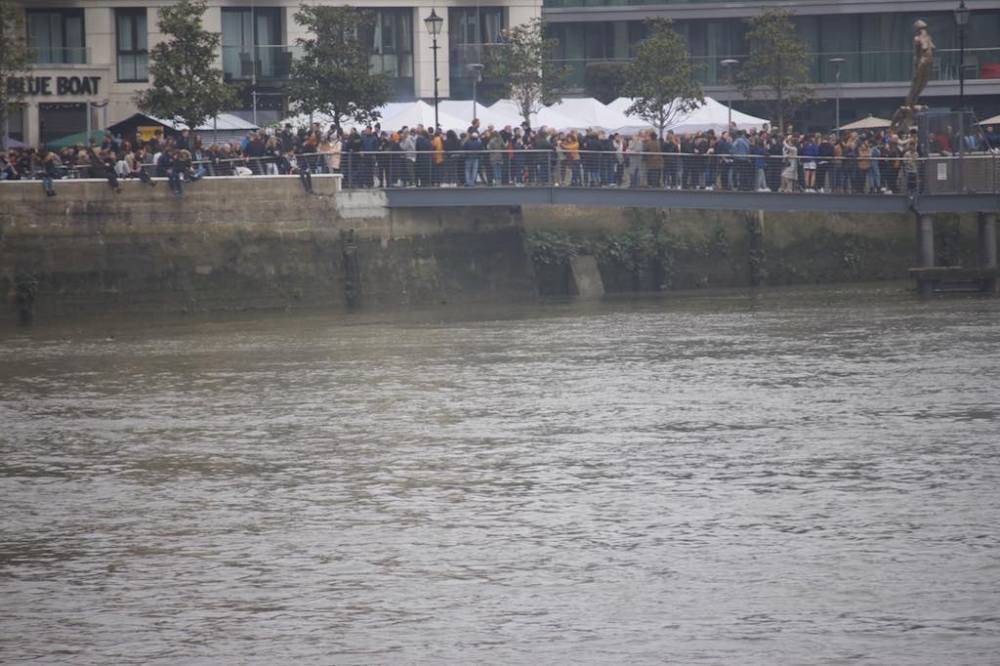 That was already full extension, but I can crop it down and see what they’re doing over there!

Well I cant quite see whats occurring, could be fighting over a monkey or something? Could be anything really, I like being a voyeur!

After that, it was nearly time to get the train home, but we wanted more food, so we ended up back at the Duke of Argyle, 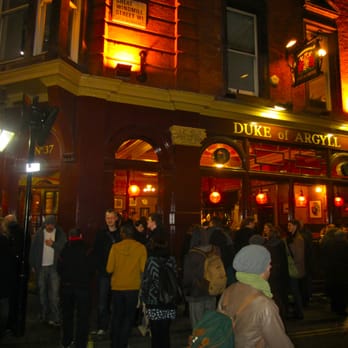 This is one I took, (it was busier on Saturday) If you’re at Piccadilly Circus, its just round the corner in Great Windmill Street, cheap – tasty – nice! 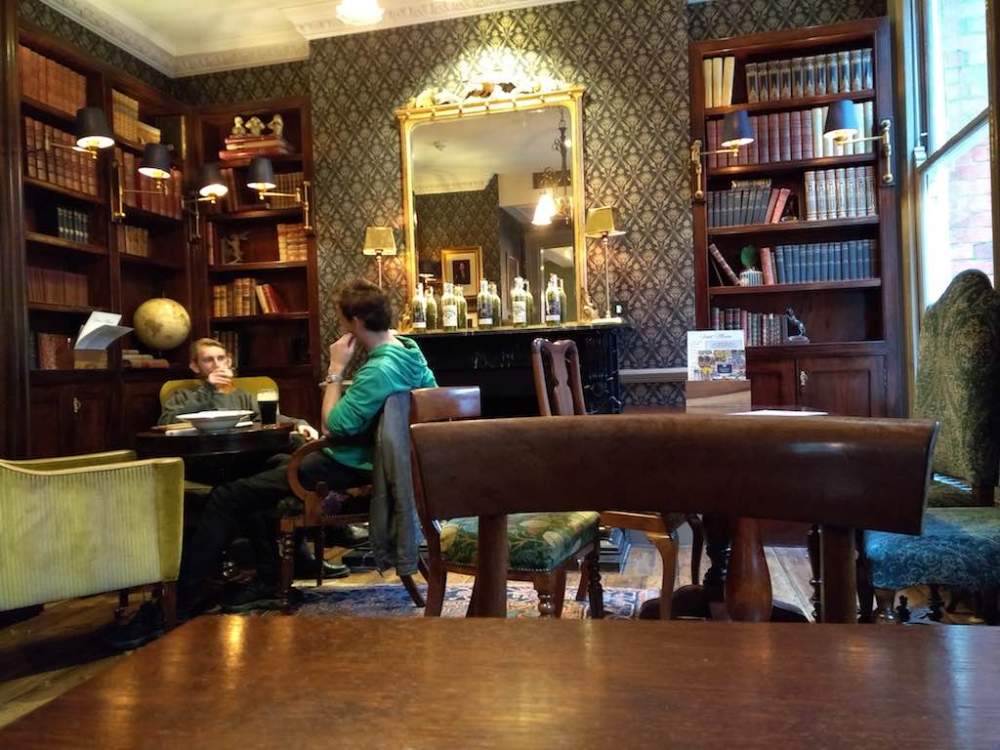 where I had bangers and mash and Louise had Lasagne. Again, it was a good price, and a nice pub too, I ate in loads of pubs over the years, but this was one of the best, a nice space to eat, no silly buggers in there, comfortable and relaxing. And the price! The price is good! Anyhow, came out of there and went off to get ice creams from this place called Gelupo, just near the pub there, its like they’re all artisans, asking if you want this or that on your ice cream, I had a chocolate one with hazel nuts on it, and it was very nice, I’d not go mad or anything, cos I’m not a huge fan of ice cream, I only went there cos its what Louise wanted, (she had honeycomb one) there wasn’t much choice on the menu for puddings in the Duke of Argyle – why do they take your card in the pub for your food, then you have to start over if you want pudding? Perhaps its in case you abscond?

Anyhow, then it was time to get the train home, which we did do, then today the guy come to do the heating and boiler, so thats that, sorted. Now can I get back to reality? I got cold hands, the cats sat on my lap, I don’t feel like doing much, its been busy lately.